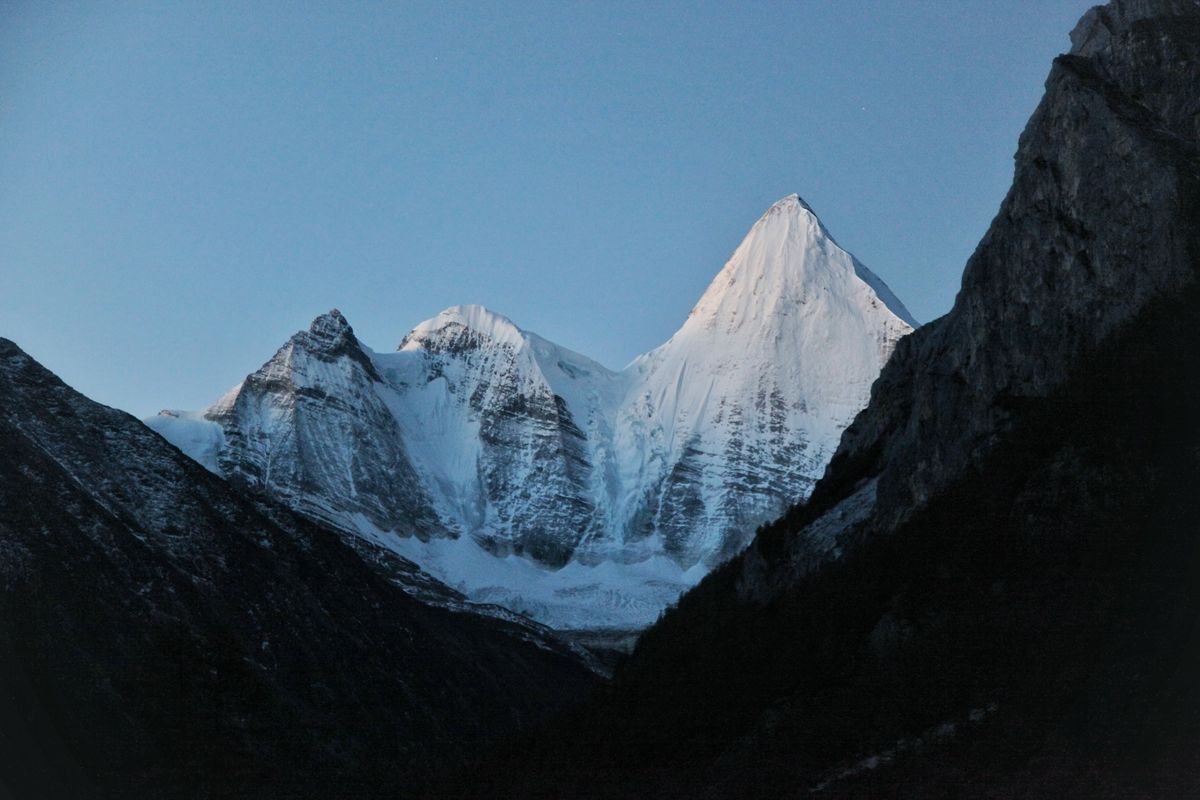 The next morning the two Israelean girls, which I met in Tăgōng, and I left to our next destination: the nature reserve Yàdīng. Encouraged by the success just two days ago we tried our luck again with hitchhiking. And again it took not too long until we found a car going to our destination! Not only that, but the two guys which stopped for us three were (Chinese) tourists themselves, driving in a comfortable BMW.

In the early afternoon we arrived in the nature reserve and found a place to stay for the night. This was the last day we travelled together, since the two girls wanted to hike the kora around the mountain Chenresig in two days, as it is recommended in general, especially at this time of the year. But since I was lacking the equipment (tent, sleeping bag, …) and also had not that much time in China anymore, that was not really possible for me.

Therefore I wanted to try something almost crazy: doing the whole hike in just one day. While I consider myself to be a fast walker, I was not sure whether it would be possible, since the total time for a serious hiker stated in most guides is something between 11.5 and 14 hours (without breaks) splitted over two days. And since the kora starts around 3700 meters and goes up from there, the acclimitization would be an important factor as well. So I considered the hike to be a challenge for myself and hoped that my acclimatization and “training” would be enough.

It took me a while to finally fall asleep that evening. On the one hand I was just too excited about the next day. But on the other hand the hostel was not really quiet. While fortunately no one was partying at this altitude, several of the Chinese tourists coughed quite a lot, probably due to the missing acclimatization. Lack of knowledge about trekking in general and not that much free time led them to take a 24 hour bus ride from Chengdu at just 500 meters above sea level to this altitude. Not a very good idea.

The alarm clock woke me up at 5 am in the morning. I stored my big backpack – except for my daypack and of course my camera equipment – behind the reception desk, as the receptionist had told me the last afternoon. Quite friendly she had explained to me that they would then just charge the one night I stayed there, but since they had to clean the room for the next guests of course my backpack couldn’t stay in the room. This conversation took us actually several minutes, since she – as the rest of the village – did not speak a single word of English and I was finally glad again to have learned at least a bit of Chinese.

Having now only half the usual weight, I set off to the starting point of the kora, a few kilometers from the hostel. My headlight was the only source of light in this far-off valley and it was still very cold which wouldn’t change until I would already have been on the kora for some time.

After some time I passed Chong Gu Monastery and the way continued to be quite easy. The first part of the whole route is still accessible without trekking. Electric carts would be bringing most of the tourists to the grasslands later on and for most people that would be all they would be seeing of this nature reserve.

As I approached the end of the road, the sun began to rise, illuminating the peak of Mt. Jampelyang in front of me. While I could unfortunately not enjoy the grasslands in sunlight, at least the sun would be right in time to not having to rely on my headlight anymore for the trekking path.

Passing a lot of Tibetan flags and some prayer wheels I slowly made my way to what I planned to be my first stop. While it started to get a bit more strenuous, I was still feeling fresh and finally I arrived at the Milk Lake, nearly 4500 meters above sea level. Time for some breakfast!

While I enjoyed my first real meal for this day, I wondered again whether I would be able to finish this route in time. The day was still long, but the last bus to Dàochéng would leave in the late afternoon. If I would be too late, I would have to spend one more day here before taking the bus to Yúnnán. I checked the time and so far it went quite well: compared to the 12 hour plan I had already saved one hour (not counting the breakfast break). But the difficult part was still ahead of me. Soon I would have to ascend to the first pass at around 4700 meters and it would be hard to keep this pace later that day. “Enough of this”, I told myself and enjoyed the quietness at the lake. A great feeling having such a landscape all for oneself!

I shouldered my backpack again and made the short detour to the Five Colour Lake before continuing to the first pass. After forty more minutes I finally reached the group of Tibetan flags of the pass and the barren landscape well above the tree line unfolded before me. I was lucky: Although it was already mid November there was no snow at all and only a few times so far ice on the way had made the path slippery.

Not long afterwards I reached the remains of some stone huts. Most people would end their first day here to gather some strength for the second pass a few kilometers ahead. In my case it was not even noon and I now felt a bit more confident to be able to finish the kora in time.

The first part of this “second” day was easy, going up and down a bit for some time. Actually a bit more down than up and while refreshing that meant the climb to the second pass would be that much longer. And indeed when I arrived in front of it I knew that the 500 meters of altitude would be not as easy as the first pass.

Now already feeling the exhaustion a bit, I started the ascent and soon had to catch my breath again. I could already see the pass, but it now seemed to be still so far away. Slowly I continued the strenuous climb, stopping for some seconds every few minutes, almost crawling compared to the ascent of the first pass. It seemed like every meter had to be fought for, but I was not willing to give up!

Finally, after one and a half hours I reached the familiar Tibetan flags and put down my backpack. The wind was blowing strong up here and the view was fantastic. Fortunately I still had some snacks to celebrate this moment. From here it would be more or less only going downwards and I was now sure that I would be able to make it back in time.

The way back to the monastery was uneventful. I passed the impressive north face of Mt. Chenresig and eventually I saw the first tourists, signaling that the monastery would be only a few hundred meters away.

Some minutes later I arrived at the bus station. Since at this time of the day the bus would be operating again, I would at least not have to hike the last kilometers back to the village. I checked my GPS and the time and was a bit proud of myself having beaten my own expectations. I had covered a distance of 36.5 kilometers in a hiking time of just 8.5 hours (with additional 1.5 hours for photos and breaks).

In the bus I met Andrew, an expat, and two Chinese guys who also planned to go to Dàochéng. Stopping in the village we fetched our backpacks again and flagged down the next bus to the entrance of the nature reserve. Being a group of four people a minibus was now quite affordable and a few hours later we reached Dàochéng.

Travelling with the two Chinese guys had the advantage that we could rent hotel rooms which would at normally not be given to foreigners. In China only some hotels have the necessary license for accepting non-Chinese tourists and these are of course then much more expensive. Andrew and I shared a double room, which was now officially booked by one of our Chinese friends, and payed almost the same price as a dorm bed in a hostel would have costed.

We finished this eventful day with a nice hotpot meal in one of the local restaurants and shared our experiences. When necessary Andrew translated from Chinese to English and I told a bit about the amazing hike. Andrew and I also discussed our travelling plans going southwards to Yúnnán. He planned to visit Lìjiāng and Dàli. While I had not visited Dàli myself so far, I had been to Lìjiāng on my last trip in China and told him about him about the old town being mostly a touristic trap. When we got to my further plans I told him about Yubēng, the next and last big stop on my trip, already thinking about the next exciting hikes there. 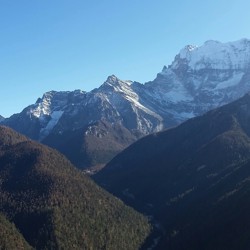 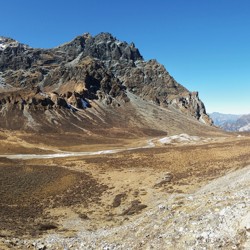 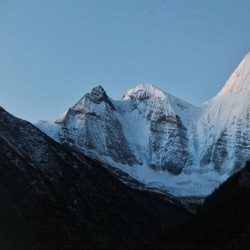 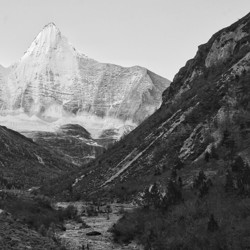 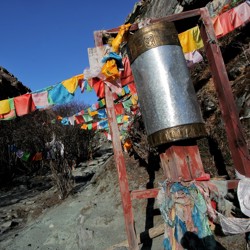 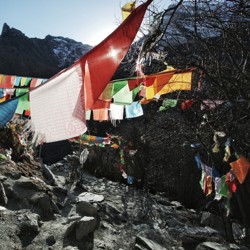 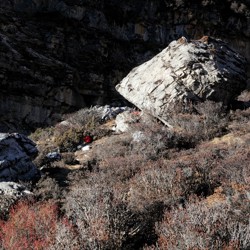 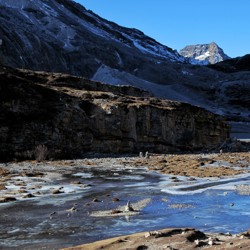 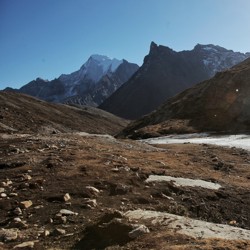 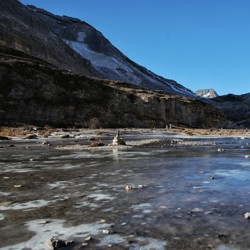 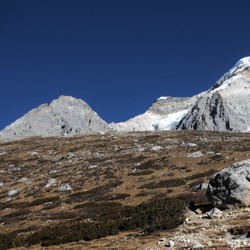 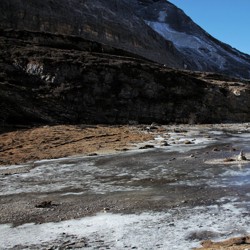 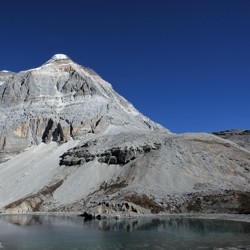 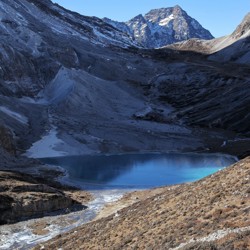 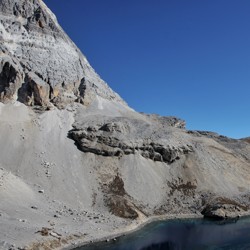 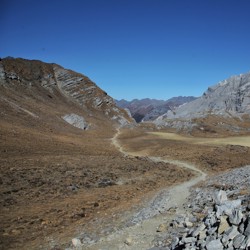 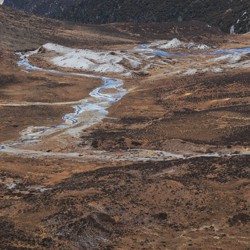 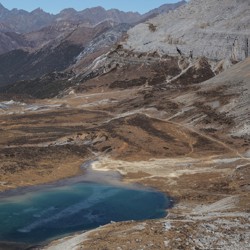 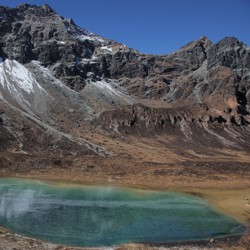 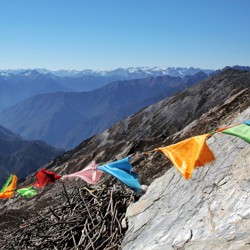 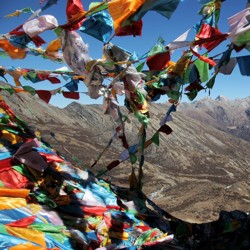 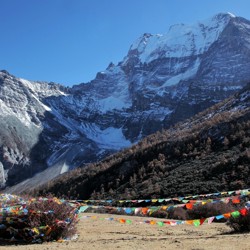